It Never Goes Away:

Gender Transition at a Mature Age 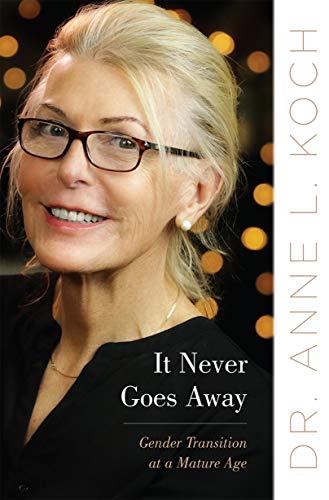 Anne Koch was married twice, a veteran, and a world traveler, a health scare when she was sixty-three prompted her to acknowledge the feelings that had plagued her since she was a small child. By undergoing a host of procedures, she radically changed her appearance to find congruence with her internal sense of her feminine gender. In the process though, Anne lost everything that she had accomplished when she was perceived as male. She had to remake herself from the ground up. Hoping to help other people in her age bracket who may be considering transitioning, Anne describes the step by step procedures that she underwent, and shares the cost to her personal life, in order to show seniors that although it is never too late to become the person you always knew you were, it is better to go into that new life prepared for some serious challenges.  Both a fascinating memoir of a well-educated person growing up trans yet repressed in the mid-twentieth century (when she had no access to trans narratives), and a guidebook to navigating the tricky waters of gender reassignment as a senior.